Island Veterinary Group is so excited to welcome our new Office Manager and LVT, Nicole Pica! She will be joining our practice on February 2nd, 2017.

Nicole has been in the veterinary field since 2004. She graduated from Suffolk Community College with a degree in Animal Science and received her veterinary technician license in 2007. Over the years, she has worked in emergency, critical care, exotic medicine, and general practice. Her furry and feathered family included a blue nose pit bull named Rexy, a French bulldog named Sophia, two caique’s named Pignoli and Bandit, and two parakeets named Hunter and Storm. She loves the summers on Long Island especially the beaches! Her favorite thing to do is spend time with her family, especially her husband and new baby girl. 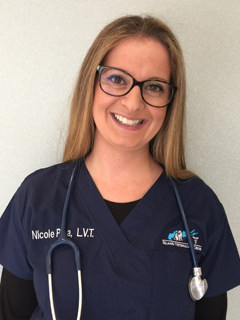 Stay up to date with news on special offers, pets, and events! Announcements